Getting Started with Windows File System Filters - Installing the Tools

It's been a while since I last posted anything. I took a break from file systems (and Windows, for that matter) but now I'm ready to get back. Since I'll be spending some time getting reacquainted with the whole thing I figured it's a good time to start a blog series for absolute beginners to this subject. However, you're expected to know C and understand synchronization (you should know what a mutexes and semaphores are).
So with that, the first step is to try to get the environment set up. We'll need the following tools:
So let's get started. Install the WDK anywhere (please note that it's an ISO image so you can either mount it with any tool you like or you can just use a tool like 7zip (or most other decent archivers) to extract the files to a directory. Then just run KitSetup.exe and we're good to go.
This is what I have installed under D:\WinDDK (the red Xs are there because the kit can't find the kit I used so I can't add anything else - just ignore those): 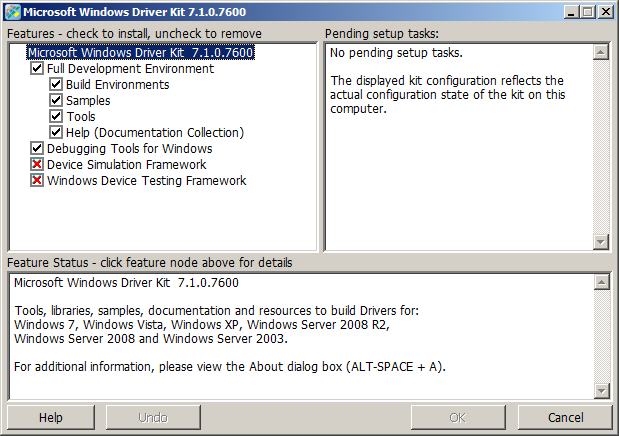 Once the WDK installed you should be able to build a sample. So the steps are:
At this point you should have the WDK installed properly. Please install VirtualBox on your own and create a new Win7 VM  (or, if you have VMware Workstation, you can just use that) and next week we'll configure the debugger and load the filter and look at it a bit.
Posted by Unknown at 8:00 AM